Written by Craig Medland
Updated over a week ago

This article is designed to provide an overview of all the ways itopia's Cloud Automation Stack (CAS) leverages and extends Microsoft's Active Directory (AD) service in each customer's RDS environment.

RDS is deployed to an Active Directory domain to authenticate and authorize each user as well as to manage, control and enforce the security policies for all users and computers in the specific AD.

In other words, RDS allows users to connect to their hosted virtual Windows desktop over Remote Desktop Protocol (RDP).   Like any connection method, the user must be authenticated against AD to enable login and to ensure their virtual desktop only allows access to a specific set of resources (files, folders, applications, etc).

The CAS Portal is used to manage AD via Modules such as Users and Groups.   The CAS Portal (cas.itopia.com) is a browser-based single page control pane.

To contrast, in traditional AD environments, IT Administrators will do this same work manually via the Active Directory Console (dsa.msc) or the Group Policy Management Console (gpmc.msc).  More later on Group Policy.

Every CAS deployment is created with its own single tenant domain.  In the SaaS delivery model, a customer is called a tenant.   This means, no matter which AD configuration option is chosen, the CAS deployment (architecture/software infrastructure) is designed to support one customer, who in turn can have multiple clients.

The Active Directory framework that holds the objects (users, groups, servers, etc) can be viewed at a number of levels.  The logical divisions in any AD network are:  Forest, Tree, and Domain.  Within a deployment, objects are grouped into domains.  The objects held within a domain can then be grouped into organizational units (OUs)

OUs can provide hierarchy to a domain, ease its administration, and can resemble the organization's structure in managerial or geographical terms. OUs can contain other OUs—domains are containers in this sense. 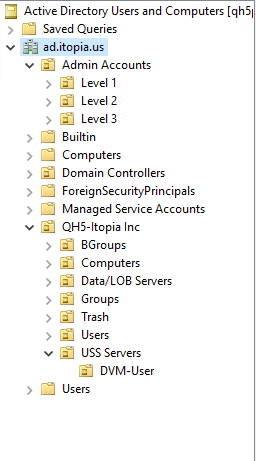 AD and Group Policy Objects (GPOs) work hand-in-hand to allow centralized management of user and server settings (but only those belonging to the AD domain in a customer's CAS deployment).

When creating and managing an RDS deployment, the itopia CAS provisions a set of service accounts within the AD domain.

These accounts are used to support various administrative functions within the Operating System (OS), AD and the RDS environment.

The same set of six (6) accounts is automatically setup and configured for each CAS deployment.   Learn more about these service accounts here.