In CAS, many changes to RD Collection Pool settings are applied instantly and take effect immediately, pending Active Directory replication within the environment. However, certain changes behave a little differently and rely on several factors to take effect. This article will describe these scenarios, and the behavior to expect when making such changes.

When you change the boot disk image in a Collection Pool, you have the option to re-deploy the existing User Session Servers (USS) with the updated image:

If you do not select this option, CAS will only use the new image for additional USS that are provisioned as you add users to the deployment (or to the Collection Pool if you use the Custom Collection Sizing feature); this is useful if, for example, you use a package management solution to deploy software and patches to your existing USS and therefore do not need to replace the image on those existing servers.

If you do select this option, you can also select whether to schedule the re-deployment or to begin it immediately (the option appears after you click Save): 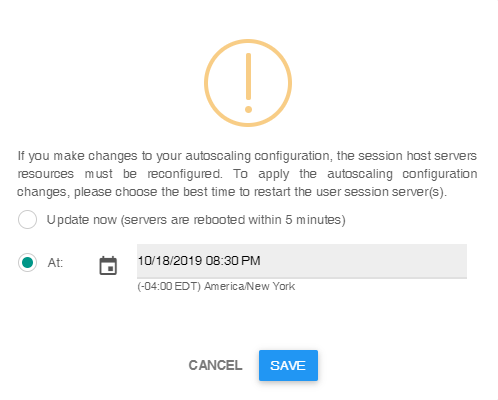 If you choose to re-deploy the existing servers, CAS will re-deploy the Session Servers using the following process (either immediately or at the scheduled time):

Generally, each batch of re-deployed servers takes about 15-30 minutes; if applications must be installed as part of Step 2, it may take longer. It is important to consider several things when re-deploying an image:

The Autoscaling feature in CAS functions on a queue mechanism, where any changes that are performed as part of Autoscale-- either automatically by CAS or manually by an administrator updating settings-- are added in sequential order to a list of changes to be made. In normal usage scenarios this provides the best experience for our customers, because CAS operates in a predictable manner and resources are scaled based on demand as needed.

However, in rare situations this queue model may introduce undesired behavior. Consider the following scenario: a Collection Pool is configured with the Autoscale values below.

The administrator creates 200 new users in the deployment and then, a few minutes later, decides to change the Autoscale settings to the following:

In this scenario, CAS will have already queued an Autoscale task to create 8 new Session Servers (200 users / 25 users per host) with the old values. Even though the new values would alter the requirement and perhaps not require any new servers (depending on how many Session Servers already exist), CAS will first perform the Autoscale task to resize the Collection Pool based on the new users, and then perform the task to resize the Session Servers as defined in the new settings. This will result in the creation of 8 additional servers and then, after a few minutes, the servers will be rebooted to use their new resource settings, and the unnecessary servers will be deleted. This produces a lot of unnecessary "churn" in the environment and may disrupt the user experience.

Although this may not be a common scenario, it is important to consider an "order of operations" when making changes to the resource requirements for a Collection Pool.