Dynamic Uptime can be enabled and configured for each individual RD Collection Pool, and applies to the RD Collection in each region. The following sections and examples will help illustrate this feature in action.

In this article, the following terms may be used:

The Dynamic Uptime feature relies on two user-defined values to perform its functions:

In other words, Dynamic Uptime will calculate the number of servers needed for the active user count without including the capacity of the ESR hosts. This can be represented using the following basic formula:

When an RD Collection Pool is configured to use the CAS Autoscale feature, the DynamicUptime agent is installed on each RD Session Host server as a Windows service. This service polls the local RD Session Host server every 60 seconds to determine the number of active (i.e. logged-on and connected) user sessions.

For each Collection Pool, the CAS backend executes a function every five minutes that uses the most recent active user count to calculate the number of required servers ( [Active Users / Users Per Host Setting] + Excluded Server Count ). It compares this with the number of active servers (i.e., powered on and accepting new connections) and performs the following:

The following scenarios will help illustrate Dynamic Uptime in action.

In this scenario, consider the following configuration for a Collection Pool at Company X:

Company X offers flexible scheduling: users can work an eight-hour day from 7AM until 3PM, 8AM until 4PM, or 9AM until 5PM. Employees at Company X use the flexible scheduling fairly evenly, with about 1/3 of users in each schedule. Thus, the number of Session Hosts for Company X would resemble the following: 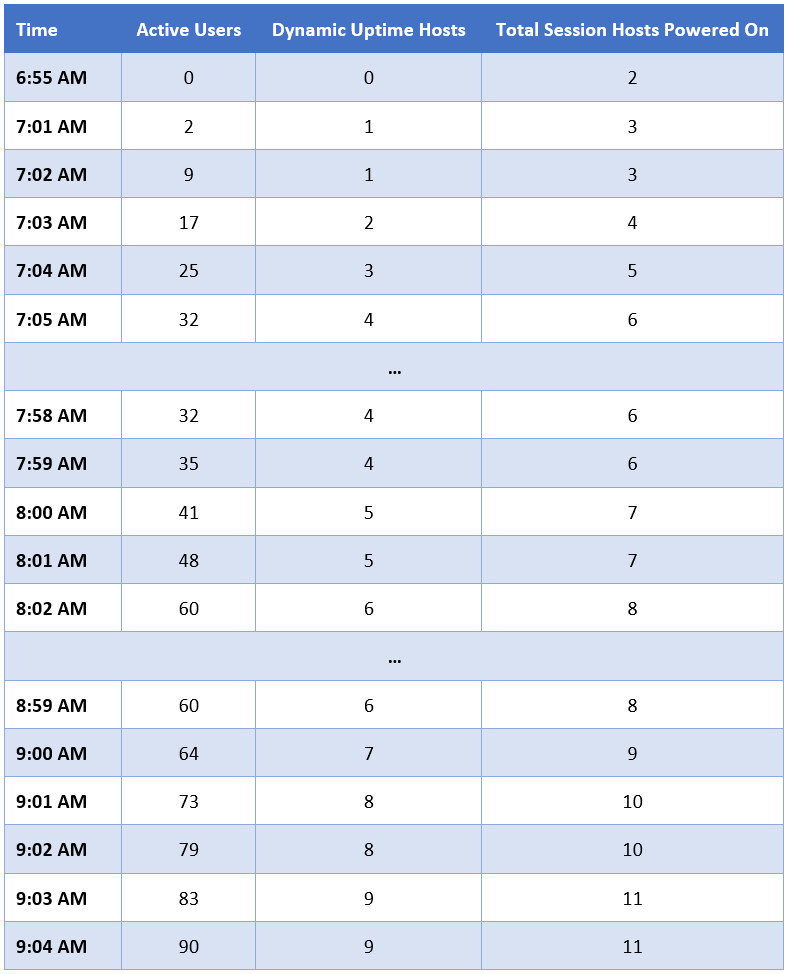 At the end of the day, users begin logging out of their sessions, and the process works in reverse: 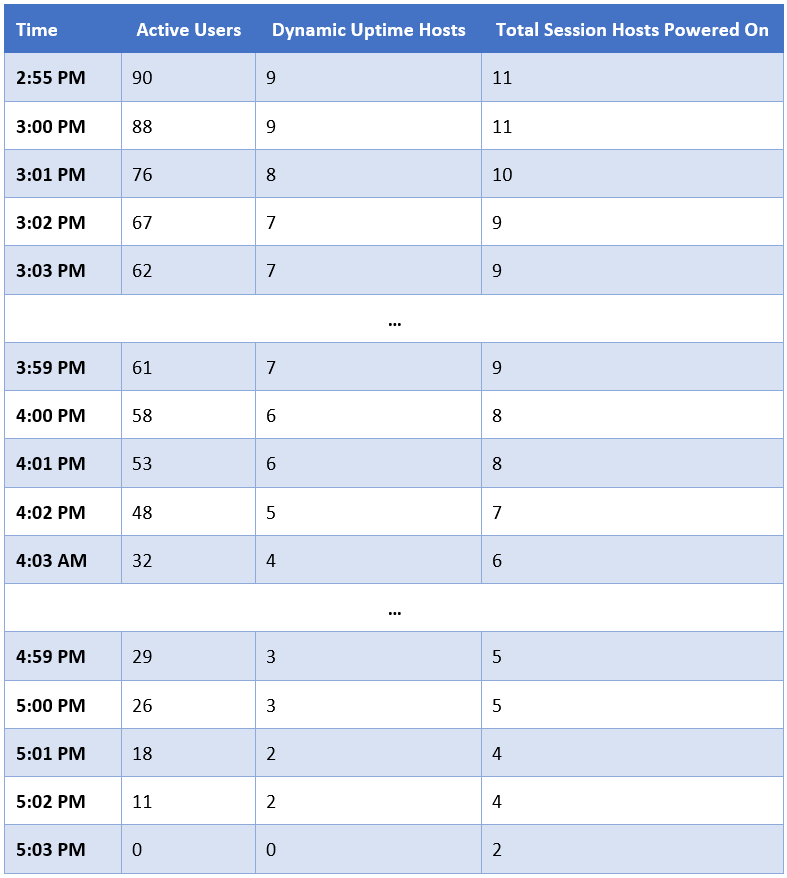 In this scenario, Dynamic Uptime simply serves as a convenient alternative to Scheduled Uptime, allowing servers to power on based on demand and to remain powered on only as long as needed.

Scenario 2 - Sporadic Use throughout the Day

In this scenario, consider the following configuration for a Collection Pool at Company Z:

Company Z uses the RD Collection Pool only to provide a legacy application via RemoteApp that is accessed throughout the day by a large number of users, but for only a short period of time.

Company Z has configured 2 RD Session Hosts to be excluded (i.e., ESR is set to 2), to serve as a "buffer" if a large number of users log in at once and additional hosts need to be powered on quickly. In this example, Server 1 and Server 2 are considered the initial ESR servers, because Dynamic Update kept them powered on even after all users had logged off (i.e., they were the last servers to reach 0 active users).

As additional users log in, they are distributed across all available Session Host servers, including the "ESR" servers. When an individual server reaches the UPH threshold-- in this case, 25 active connections-- it is excluded from accepting new connections.

As the peak usage period elapses, users begin logging out of the environment. The servers that first reached the UPH threshold are typically the first to reach 0 active users and are shut down by the Dynamic Uptime service. The remaining servers continue to accept users that may log in, but when a server reaches 0 active users it may be shut down by the service. When the number of powered-on servers is equal to the ESR value, the remaining servers will not be shut down.

This is represented in the table below. 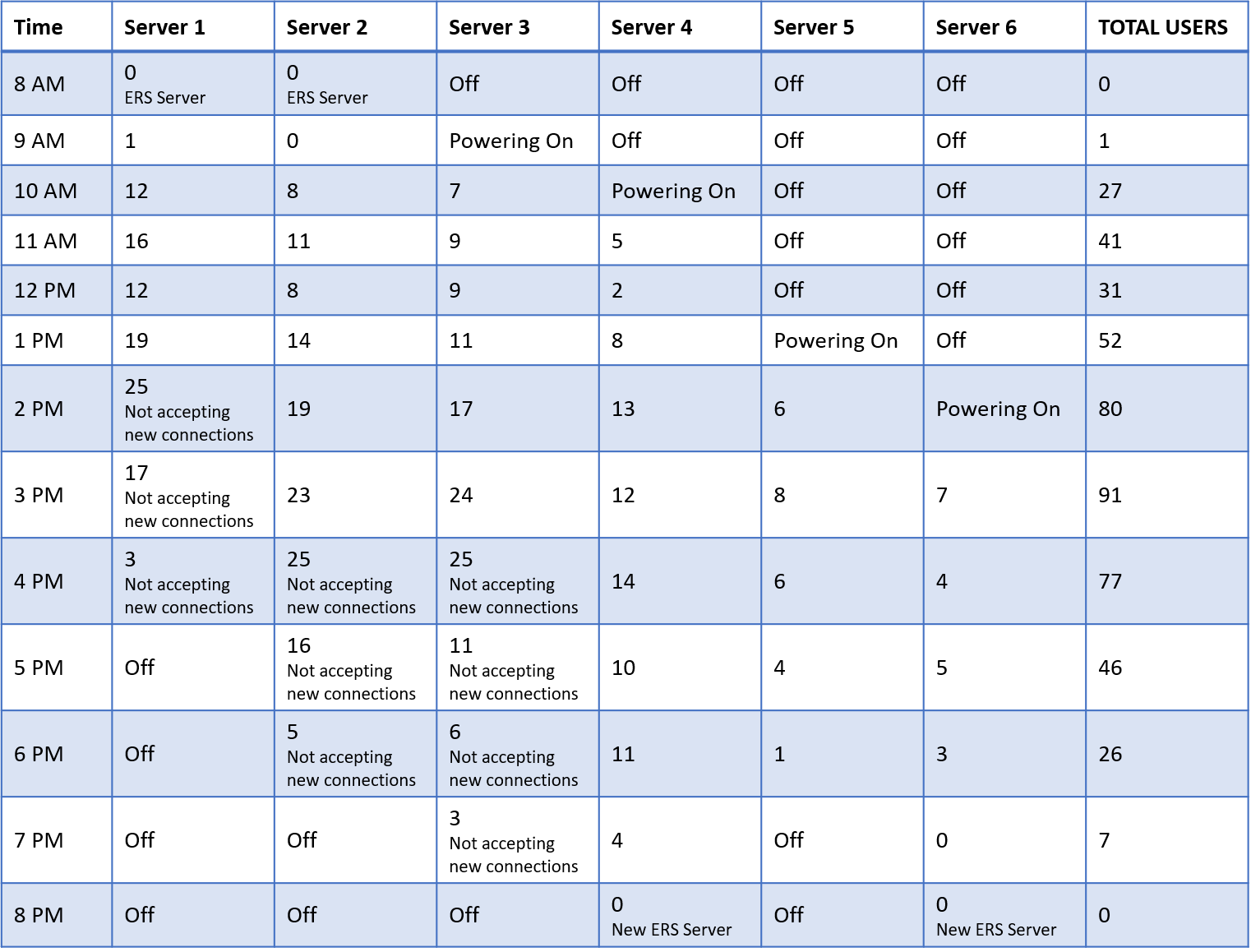 CAS also provides the Scheduled Uptime feature for starting and stopping VM instances based on a configurable schedule. As the name implies, Scheduled Uptime allows an administrator to define when to start and stop servers based on a schedule; the schedule can target a subset of servers and can be configured for unique times each day of the week. Unlike Dynamic Uptime, Scheduled Uptime can be applied to all servers in a CAS deployment, not just RD Session Hosts.

Scheduled Uptime is a useful feature for specific use cases. If, for example, an organization has offices around the world, Scheduled Uptime can help shut down unnecessary infrastructure in each region during off-peak times, which can significantly reduce GCP Compute costs.

For this reason, we do not recommend using Scheduled Uptime on RD Session Host servers if Dynamic Uptime is enabled. Attempting to use both features on RD Session Host servers may lead to unpredictable and unexpected results, and you may not get the costs-savings that could be achieved by using either feature separately. The end-user experience may also be impacted by sessions being terminated as servers are shut down according to their schedule. You may continue to use Scheduled Uptime for other server roles, such as RD Gateway servers and Domain Controllers.