There are several ways to import users to itopia CAS, and created in AD.

This guide describes few different ways to easily import multiple users at once and save time and work.

💡 Note: Before importing users, check your subscription to make sure that you have enough users for the import. 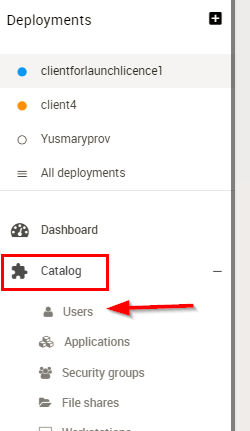 Network discovery discovers all the users in the domain and saves them in itopia Catalog in the portal.

After running the discovery, the users collected by the tool are saved in the Catalog under Users module (see screenshot above).

To screate users your deployment must be integrated with Google and on Cloud. To import the users from catalog to AD, go to Cloud Desktops section and hover your mouse over the green + sign on the right.
Select "import from catalog" option. 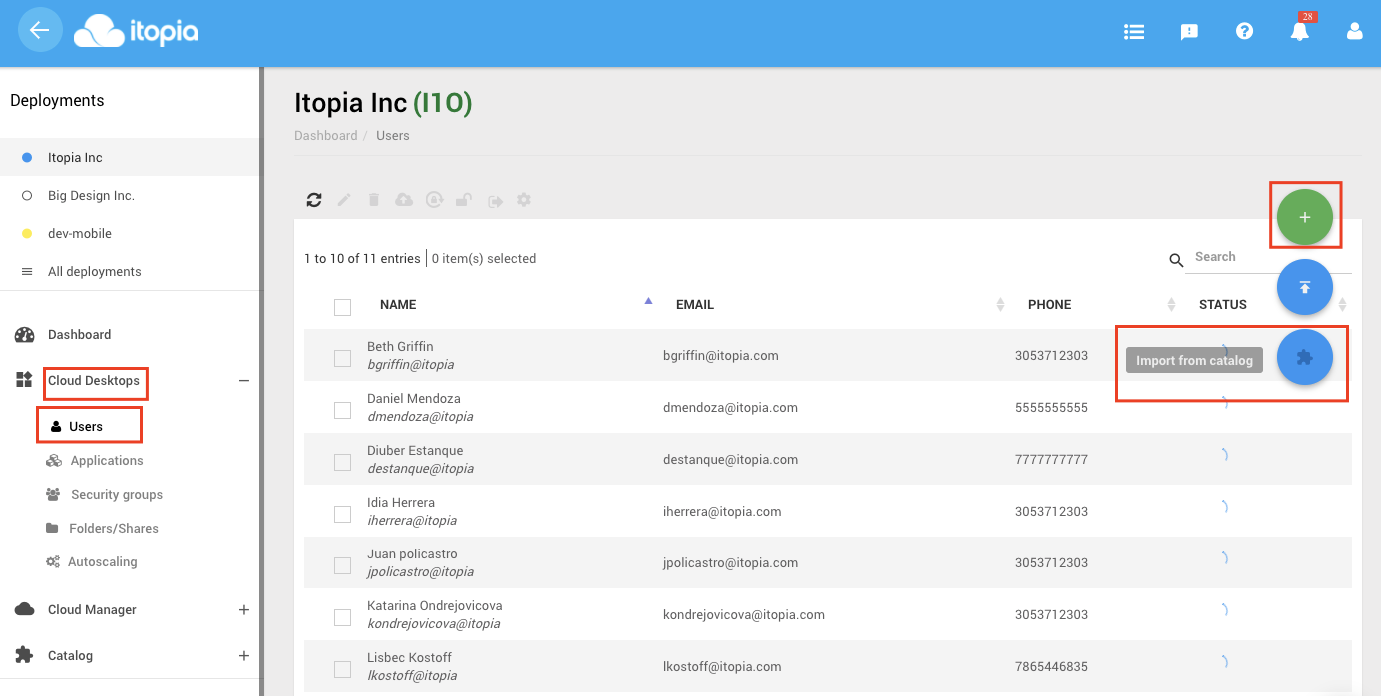 You can import users in bulk from the Users module (up to 200 users in one excel file).
Hover over the green + sign on the right and select "Import from Excel" option 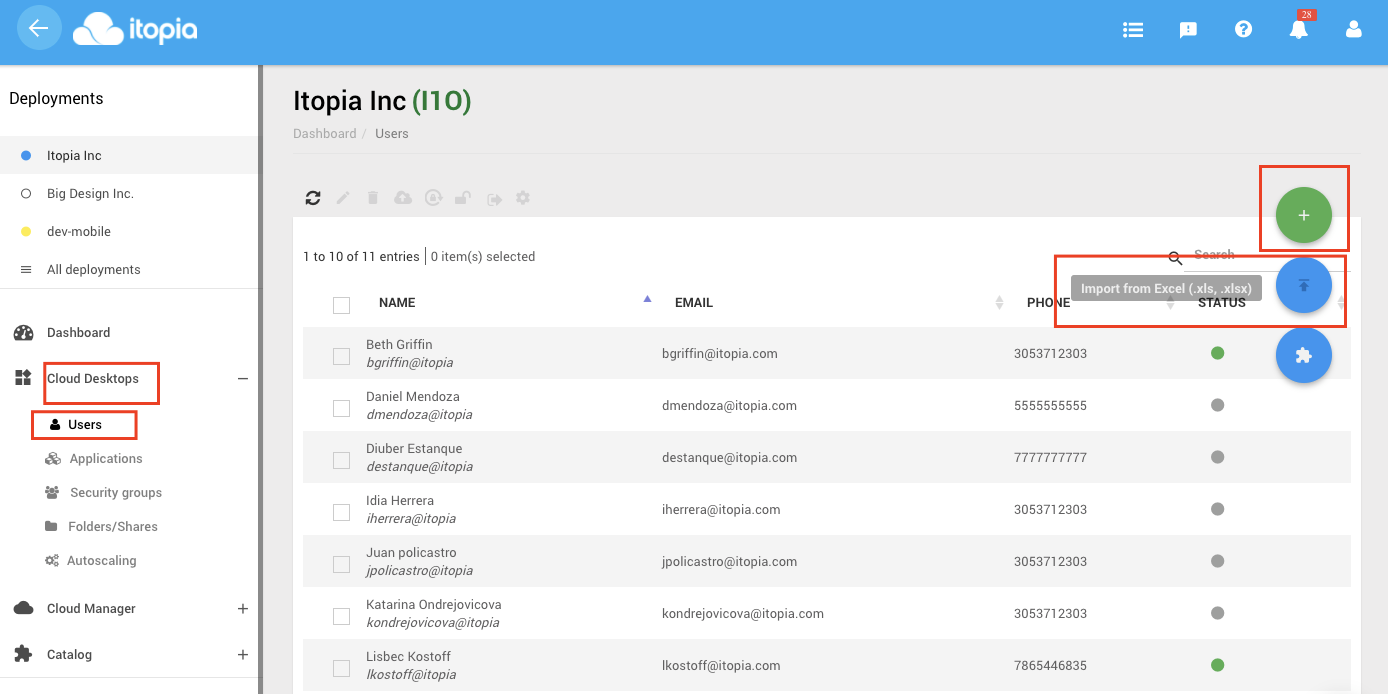 After downloading the template, fill in all the mandatory fields (those with a star) for the users you want to import. The second line of the sheet is an example entry for your reference.

Once the file is complete, save it and import it clicking on "SELECT FILE" button

After importing the file, you'll get the list of users displayed.

If there are any errors with users, you'll see a red triangle next to the username. Normally the alert is displayed if there are missing fields or unallowed special characters in the user details.
You can edit user details clicking on the pencil icon.

After fixing the errors (if any), you can select the RD Collection the users should belong to and click "ADD" to import the users. 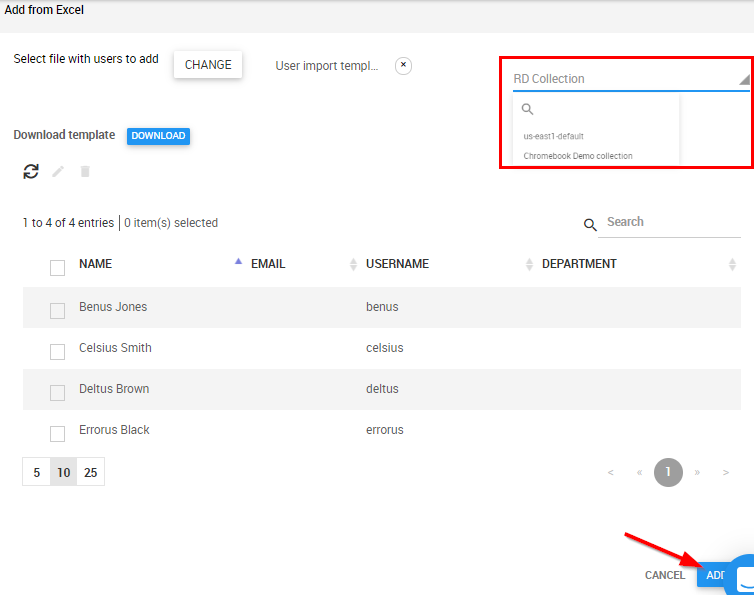 Importing Users to itopia and GCP from Extended AD

If you created a deployment extending your existing domain, you can decide what users and security groups you want to bring to itopia and GCP.

You will get the message stating there are no users in your deployment. The system will offer you an option to import them from your existing AD.

To import users from local AD, CAS filters the search and exclude users that match any of the conditions below:
- Locked or disabled users
- Members of Administrators, Domain Admins or Enterprise Admins Groups
- Member of the CAS deployment Users group.

Before importing users to CAS make sure they do not match those conditions or they will be unavailable.

To create those users in itopia and GCP click ADD USERS FROM AD button. 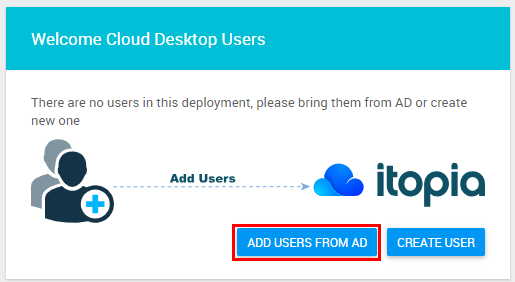 You will get a list of your AD users, click the check box next to the users that you want to bring to GCP and click Save. 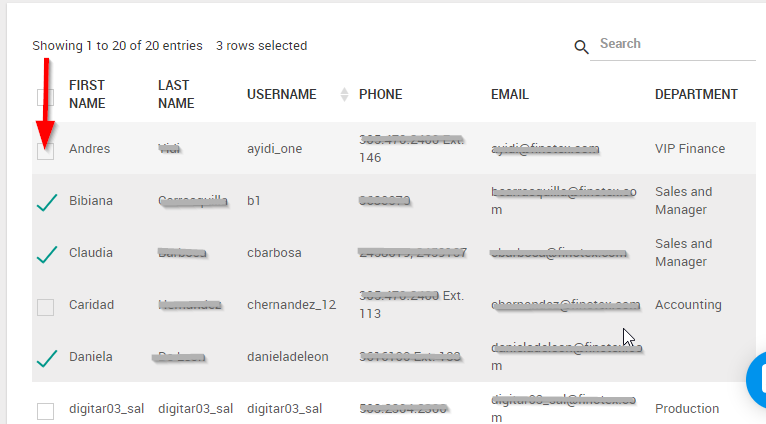 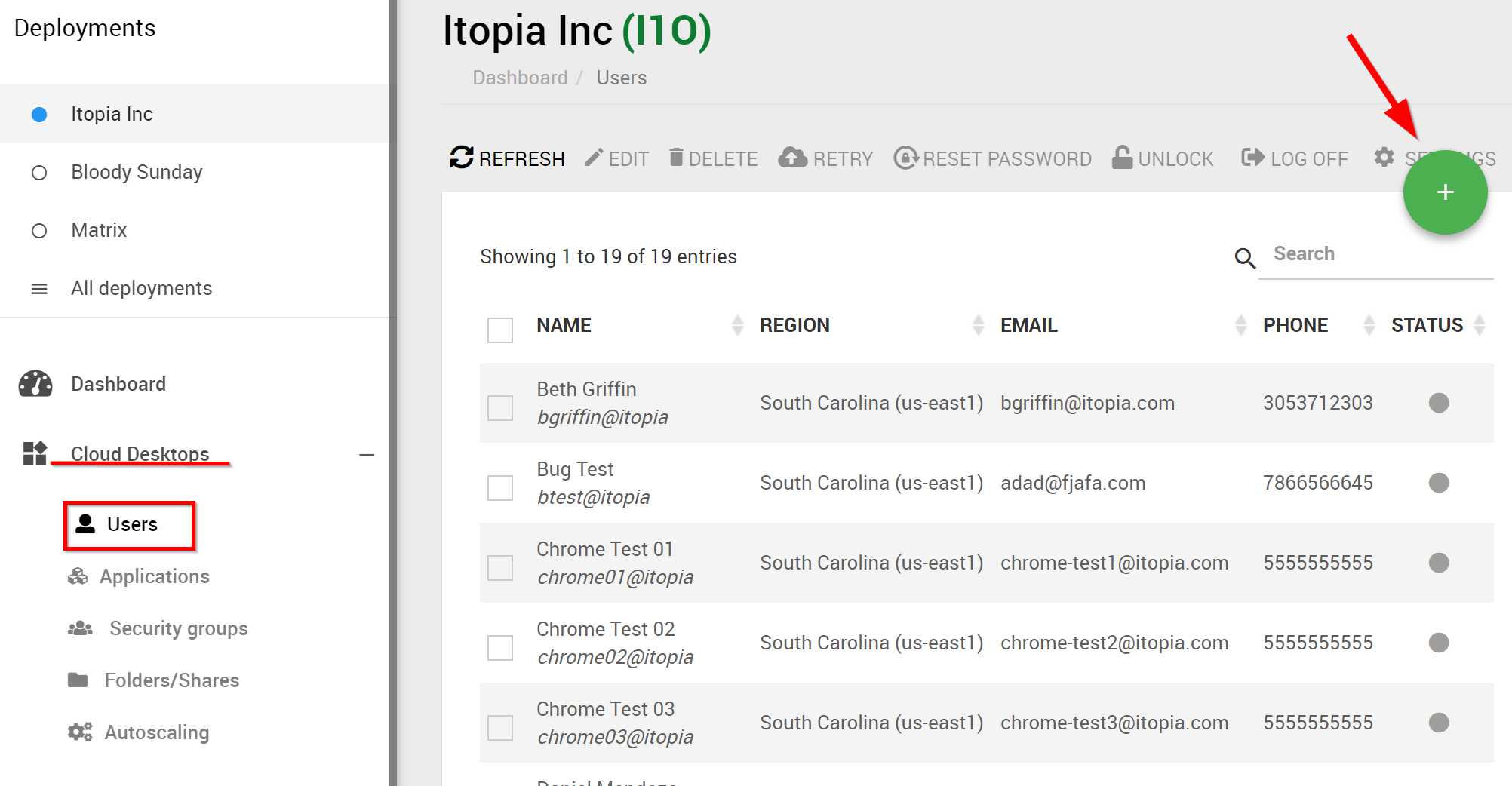 Importing users through an integration

itopia offers a couple of integrations: Zendesk and ConnectWise that allow you to import users from a ticketing tool to itopia.

In both cases, first make sure that the integration is set up and the deployment is exported to ConnectWise or Zendesk. You can see the setup in details when clicking on the pencil icon in Deployment dashboard.: 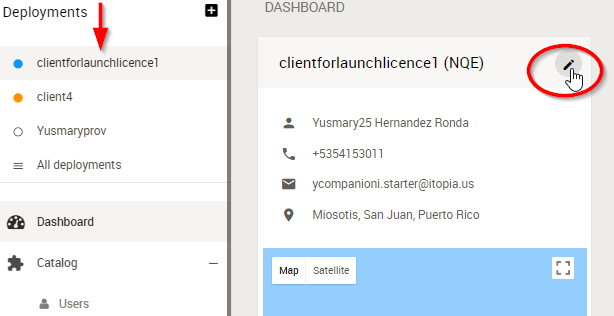 💡 Note: We showed an example of ConnecWise integration but the steps are the same for Zendesk integration as well.

In the bottom of client details window you can create the client with ConnecWise or you'll see that the client is already created: 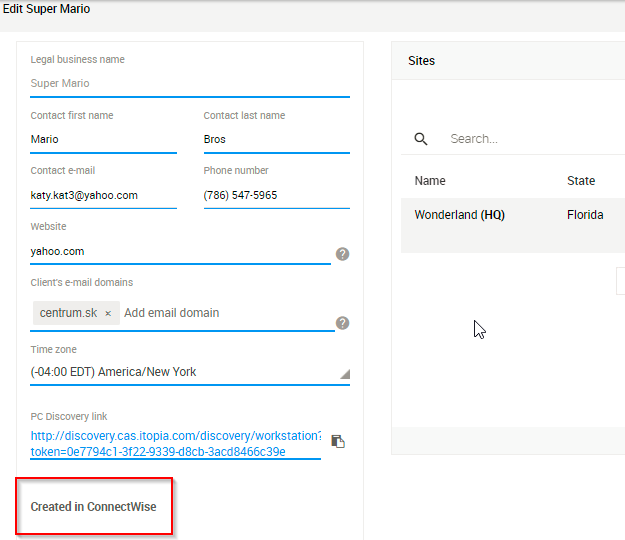 As the next step, go to Users module under Cloud Desktops section and hover your mouse over the green plus sign. Select "import users from ConnectWise": 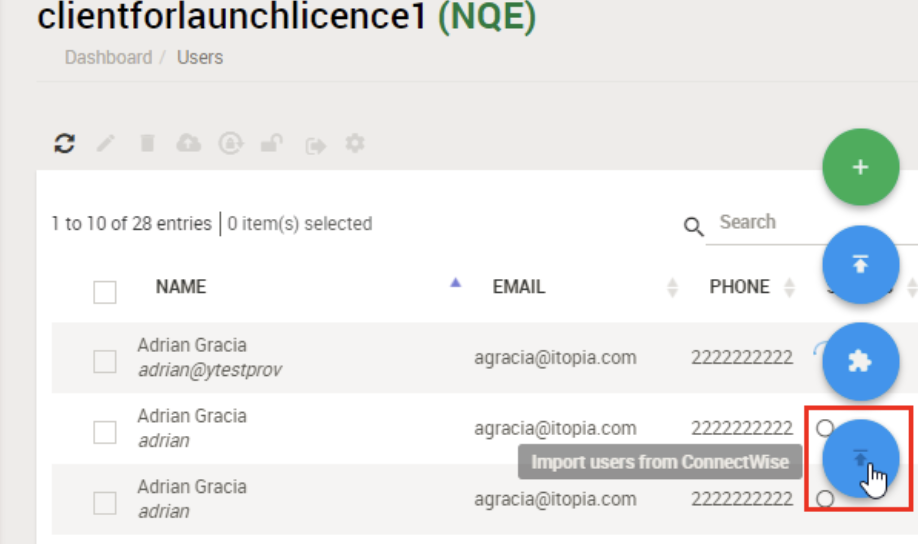 You will match itopia CAS user fields with ConnectWise user fields and finish the import. 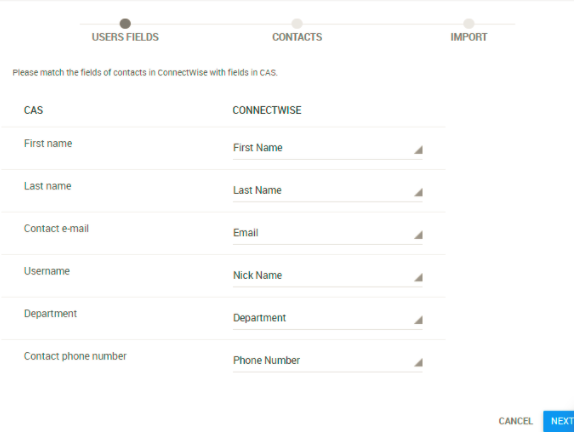 💡 Note: if there are no users appearing when trying to import them from ConnectWise, make sure that the company has users in the "Contacts" section of your ConnectWise - that's where our tool is pulling the users from.

Importing users from your AD

Sometimes you might have had created a user directly on AD and want to add it to CAS. Now you can import the user with the "Add from AD" option.

The option is available in the User module, when you hover over the green + on the right. 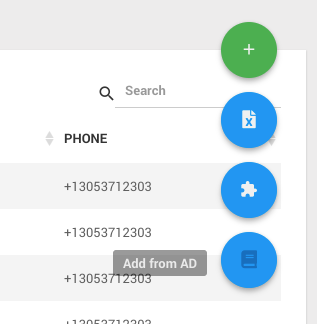 When you select it, you'll be taken to another screen that will have a spinning circle while it scans AD for any users that aren't already on CAS.

itopia CAS will then load the list, you select the user you'd like to import and hit save.

It will also add them to the other groups that block them from using the restricted applications, if configured, that they don't have access to.

With this you are now able to fully manage the users like any other user in CAS. If you delete this user in CAS, it will also delete them in AD.